It looks like a standard debate setting: two leather couches, four journalists, and a discussion moderator standing in the middle. But on each sofa, two people who are each other’s opposites are sitting. Both are Poles; there are few European countries where journalism is as polarised as it is here. Those opposites usually do not speak to each other – let alone seemingly friendly share a couch. “It’s amazing how well-mannered and civilised that right-wing boy is. Much better than expected, I have to say,” Seweryn Blumsztajn (71) breaks the ice in his unique way at the start of the debate about the state of the Polish media. In Poland, Blumsztajn is famous for his fight against the communist regime in the 70s and 80s, and because he was the co-founder in ’89 of the largest Polish newspaper, Gazeta Wyborcza. If you divided Poland into roughly two camps, then Blumsztajn would belong to the progressive-liberal camp. People on ‘his side’ oppose the current government and are usually pro-EU.

“You can only eat vegetarian food here.”

That ‘well-mannered boy’ Blumsztajn is talking about, is Marcin Makowski (31). Makowski belongs to the other side: he is a right-wing conservative and a supporter of the current government. Blumsztajn’s comments induce in him a friendly chuckle; this is what he had expected. Upon entering the Warsaw theatre where the debate takes place, Makowski had looked around a bit uncomfortably. “You can only eat vegetarian food here. It doesn’t get more left-wing than that,” he had mumbled disapprovingly. “But then again,” he had explained apologetically, “everything in Poland is political, there is no way to avoid it.”

Next to Makowski on the red couch is his contemporary and opponent Jakub Majmurek (35). Majmurek is a freelance journalist and writes for newspapers and magazines that Makowski would never read; Majmurek visits places where they make progressive theatre and vegetarian food. Both men know each other only by name and hardly look at each other during the debate. But there is a relaxed atmosphere. For the moment.

Blumsztajn is also sitting next to a contemporary of ‘the other camp’: Janina Jankowska. Just like Blumsztajn, Jankowska, a renowned radio journalist, did resistance work for the trade union Solidarność during the communist era. Both journalists once fought for the same ideals, but after ’89 they went their separate ways: Jankowska turned right, Blumsztajn turned left.

Two generations of journalists, two political camps that would rather not be in each other’s company. Why are they here now, side by side? The occasion is the fiftieth anniversary of the protest march in Warsaw in 1968, which Polish students had organised against the censorship of the communist regime – an unprecedented action at that time. Almost thirty years after the fall of communism in 1989, there is freedom of the press, officially, but despite this, there are grave concerns about the state of the Polish media. The independent American democracy watchdog Freedom House, for example, has since a few years been assessing the status of freedom of the press in Poland as only 'partially free'. According to Freedom House, the right-wing government is ‘intolerant’ to independent and critical reporting, and the self-censorship of journalists has increased.

When you look at the world through the eyes of the right-wing Polish media, you get a completely different version of reality from the one you see when you look at the world through progressive-liberal media glasses. They are parallel worlds that hardly ever meet, each with its own narrative. What then remains of journalism and what is the responsibility of the individual journalist? To discuss these questions and to bring together those parallel worlds on one stage, the IRON CURTAIN PROJECT organised a debate on the anniversary of the fight against censorship.

We had been warned: “It’s a bizarre plan, and probably impossible,” journalist Kamil Bałuk (28), coordinator at the Instytut Reportażu, a Polish training centre for journalists, assured. Either the opposite camps are going to bicker without end, or – more likely – no journalist is going to be willing to participate.

That turned out to be no exaggeration. Some journalists refused the invitation. “Sorry,” Aleksandra Rybinska, a renowned journalist who works for right-wing outlets, wrote. “I know the views of the liberal Polish media inside out. I already know what I’m going to hear, and I also know what the more conservative journalist is going to tell me: the exact opposite. I doubt this will help anyone to understand the situation in Poland better.”

“A bizarre plan, and probably impossible.”

Those who are in power dictate the narrative. That is how it has always been in Poland. After the fall of communism, the newspaper of Solidarność, Gazeta Wyborcza – which actually means ‘election paper’ – became the most important newspaper in Poland. It became the mouthpiece of the liberals, co-financed by advertisements from government organisations. The newspaper was made by the ones who won from the communists: they were the new elite, they benefited from capitalism and became more and more arrogant, according to their opponents. Gazeta Wyborcza was not the only one: Solidarność’s elite controlled the entire media landscape. Democracy watchdog Freedom House confirmed that public TV and radio stations also leaned more towards the liberal views of the government than towards the views of the right-wing opposition. According to the organisation, Poland does not have a tradition of independent public broadcasting such as the BBC.

THE OTHER SIDE HAS ITS TURN

And now, after all these years, the right-wing side ‘has its turn'. Since 2015, the conservative right-wing party Law and Justice (PiS in Polish) is in charge and controls the narrative. But PiS is doing that harsher and more viciously than any other government has ever done, the progressive-liberal camp of journalists like Jakub Majmurek protests. Shortly after PiS had won the parliamentary elections in October 2015, the entire management team of the public broadcasting companies was replaced. Journalists were fired or left on their own accord. Since then, the TV news is the mouthpiece of the PiS government, something that Freedom House also worriedly confirmed in its report on the freedom of the press.

The language of '68 is back, according to the liberal camp. “After all, that was also based on lies and manipulation,” Majmurek states during the debate. The relaxed atmosphere on the red couches in the theatre in Warsaw has disappeared. “If you don’t like the TV news, just watch a different channel – that’s actually possible in a free country like ours,” Jankowska, from the right-wing side snidely remarks. “I don’t buy into that panic that Kaczyński poses a threat to the freedom of speech.”

Jankowska, small in stature and fierce in tone, knows only too well what it means when the state has a monopoly on media: she worked in '68 as a young reporter at Radio Polska. “It would not even have occurred to me to make a report about the student uprisings in '68,” she explains. “For whom? Nobody, nobody would publish or broadcast it. Of course not, the state decided everything. Nowadays, you can just go to a different medium.” In the seventies, Jankowska secretly set to work – in addition to her 'normal' radio job – for the underground press; in the eighties, she worked for the opposition union Solidarność. Blumsztajn, next to Jankowska on the red couch, had been active in the underground resistance movement since '68. “That whole struggle has been for nothing, Mrs Janina,” Blumsztajn snarled at his contemporary Jankowska. “What is happening now, is against the rules of democracy. The public television station is only concerned with propaganda and hate speech. The medium is the party, just like it was back then.”

“Gazeta Polska is simply a ‘szmata’, a slut”

Blumsztajn’s criticism bounces back at him. His newspaper Gazeta Wyborcza has been campaigning on the front page for years, Makowski tells Blumzstajn. “You publish manifestos and even give advice on how to vote.” That is not the same thing, Blumsztajn replies. “We do it because we believe the current government is destroying democracy. I don’t believe in non-engaged journalism. We are fighting for freedom of the press. If the government opposes it, we fight the government.” Majmurek, who is completely on Blumsztajn’s side, gives his two cents: “It’s just like war. Armies are allowed to fight, but they have to follow certain rules.”

Blumsztajn is on a roll. What Gazeta Wyborcza does, cannot be compared to how the right-wing media behave, he states. Take the right-wing newspaper Gazeta Polska which is regularly compared with Nazi Germany because of its populist and xenophobic articles, “it is simply a ‘szmata’, a slut.” At hearing that word, some people in the audience start to clap while others shuffle their feet disapprovingly. One person even gets up and walks out. Makowski addresses the people who are clapping: “How would you react if something like that was said about Gazeta Wyborcza? We’re not going to get anywhere when we talk to each other using those types of words.” What they warned us about, seems to begin: name-calling instead of conversing. The common love of journalism appears unable to overcome political differences. On the contrary, both sides accuse each other of being a threat to the beloved profession. “Journalists have been too involved in politics in Poland since '89,” Jankowska assesses. “A real public debate doesn’t exist here, because everybody only addresses their own audience. Journalism should be about exchanging thoughts instead of persuading other people to think what you think.”

Nevertheless, the young journalists are content afterwards – although they do not drink a beer together, each stands with its own ‘supporters’. They call it 'unique' that they were ‘more or less forced’ into a conversation with each other. They also noticed that both camps were represented in the audience. That does not happen often, says co-organizer Kamil Bałuk, beaming – he is pleased that the plan has actually become a reality.

“So it is possible after all.”

“I will often think back to this,” Makowksi says. “ Because apparently, it is possible, a conversation between both sides. It has certainly made me think. We, journalists, all have a responsibility in this. I will keep it in mind.”

The next morning, the right-wing newspapers report on the internet in the ‘scandal’ section that Blumsztajn has offended Gazeta Polska. Makowski has shared a video of Blumsztajn's comments on Twitter, resulting in hundreds of reactions. The bickering continues.

In spite of repression, 1980s Poland saw the rise of an active gay rights movement. Now that the rights of sexual minorities are under pressure… 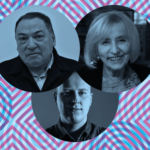 Fifty years after the student protest against censorship a special pop-up museum on the spirit of 1968 in Europe is opened in NOWY TEATR. On…