Usually when Balázs Gulyás (29) posted something on Facebook, he would get a limited response. “I would share something that I thought was terrible or ridiculous, but not many people would care”, says Gulyás, a sociologist, blogger and activist from Budapest. In the fall of 2014 one post proved a notable exception: Gulyás’s criticism of the government’s proposal to levy a tax on internet use. He considered it censorship in disguise, a ‘digital iron curtain’. The Facebook-page that he set up in protest against the measure got 500 likes within an hour. “When I saw that, I knew we had to set up an event as well, to take to the streets.” The page was simply named ‘100.000 against the internet tax’. It would prove to be an auspicious title.

“When I saw that, I knew we had to set up a Facebook event, to take to the streets.”

On a cold February night, hundreds of thousands of people gathered in the square in front of the government building in Bucharest to protest. The protestors held up colored pieces of paper, which they lit up using their smartphones. Red, yellow and blue blocs lit up Victory Square and formed one gigantic Romanian flag. The government had issued a decree to lower the punishment for official corruption. The main benificiaries of the measure? High-ranking members of the governing Social Democratic Party. A broad-based public anger ensued.

“I remember we were watching the news before we went to bed – we immediately put on our ski-suits over our pyjama’s, hailed a cab and left for the Piata Victoriei”, says Adela Rapeanu (33) via e-mail. She works in PR, teaches Communication at the University of Bucharest and has been actively involved in some of Romania’s biggest protest for a few years now. “On our way to the square, we sent a message to our friends”, she writes: “We thought only a few crazies like us would show up, but when we got there, there were already some 200 people in front of the government building. After an hour, there were already thousands of people. They rushed in from the boulevards around the square, from the subway and the bus stops. We stayed until 2 a.m. – it was freezing, but we screamed incessantly. There was so much energy, such a good vibe. I really thought we would win this.”

“We immediately put on our ski-suits over our pyjama’s, hailed a cab and left for the Piata Victoriei”

From Romania to Hungary, from Poland to Slovakia; across Eastern Europe people have taken to the streets in large numbers over these past few years. Buyoed by social media, a younger generation has fueled a wave of protest. The demonstrations sometimes lead to clear-cut victories. Seventeen days after the corruption decree was issued, the Romanian government withdrew the measure. In Hungary too, the internettax was nixed, in part thanks to Gulyás. In Poland a mass demonstration by women carrying black umbrella’s quickly caused an extreme anti-abortion measure to be thrown out. These are resounding victories that end in disappointment. Nowhere have they lead to real political change.

PEOPLE HAVE A LIFE

“It is nearly impossible to engage people politically in the long run”, says Jacquelien van Stekelenburg, a professor of Sociology at VU University in Amsterdam, who specializes in protest. “Simply put: people have a life. They can sympathize with a certain cause, but they have no interest in being the driving force behind the resistance.”

In Romania there were mass demonstrations in 2015 too. Then because of a night club fire that was attributed to large-scale corruption. The government stepped down. Still, one year later, those same social democrats won the election convincingly. In Hungary the mass protests led Viktor Orbán to concede his defeat on the internet tax proposal – a rare exception. He still governs with a comfortable majority. His authoritarian tendencies are growing. It it all too easy for the status quo to dismiss forms of protest. ‘Not representative’, they’ll say.

Gulyás, too, was confronted with that sobering reality. He had mixed feelings when he heard that Orbán had withdrawn the proposal: “Of course I was happy that our protest had succeeded, but I so wish we would have had more time to inform people about all the stupid ideas coming from Fidesz (Orbán’s party, T.S.) The internet tax certainly wasn’t the only issue”.

Still, Gulyás consciously did not build on his movement against the internet tax, fearing it would be hijacked by other political interests: “We wanted let people know: we won. We wanted to give them a real sense of victory. That’s why we disbanded the group. If we had protests other issues, that feeling would have been diluted.”

THE ELITE VS THE LOSERS

According to Rapeanu, the Romanian activist, a lack of engagement on the part of people under 30 is a serious issue: “Most Romanians who were born after 1989 don’t vote”, according to Rapeanu, whose belligerence is alternated with a realistic outlook on the future. “After ’89 our parents had difficulty adjusting to the capitalist system. They certainly didn’t have time to make a new generation politically aware. Nowadays, young people are focused on travel, shopping or clubbing. All perfectly normal activities for the average youngster, but the problem is that there is no room for political issues, even when it all comes to it”.

Guido van Hengel, historian at the University of Groningen, who specializes in post-communist Eastern Europe, confirms that perspective: “Most young people in the former Eastern bloc are tired of the corruption and the nepotism, but would rather spend their time searching for a better future elsewhere in Europe.” According to Van Hengel the previous generation was more optimistic that everything would be better after the fall of communism. Liberalism brought economic growth, but also caused an enormous wealth gap. The western-oriented elite and those who were left behind – the economic ‘losers’ – seem to live in two different countries, sometimes.

Like Gulyás, Rapeanu recalls how a sense of hope made way for desillusion: “I thought we had truly awoken en that what was happening in Bucharest and Cluj (another Romanian city of protest, T.S.), was representative of the entire country. It wasn’t. It isn’t. Not even after we impressed Europe and the world with our protest in the square”, she writes in her e-mail. “Those in power fall back on their rural voters”, states Van Hengel. Only when the town squares are overflowing with a furious crowd and a certain issue turns into a PR nightmare, do governments in Budapest, Bucharest or Warschau feel compelled to make concessions. Rapeanu: “Most people who are willing to waste time and energy by constantly keeping watch on the authorities, are a minority. We are done – tired, dispirited and impatient.” A BETTER COUNTRY FOR OUR CHILDREN

“Whether or not it is still useful to protest, depends on what you define as succes”, says Van Stekelenburg of the VU. “Do movements want to influence politicians or do they want to create awareness among the people? A succesful demonstration does more than just generate attention. It gives the movements a sense of identification and empowerment. Still, the movements in Eastern Europe face an enormous challenge according to the sociologist: “The have to maintain momentum and grow their movement, while staying focused on the long term. In Romania, for instance, the protest this winter may have been corruption, but the appeal of it lay in the disappointment in the entire political system: ‘Does the system work for us?’ By making that link, the sympathizers outside the core of activists come out to protest as well”, according to Van Stekelenburg: “A well-timed protest can directly influence policy, an election can’t. The notion that protesting is useless these days, is simply a myth.”

“know that change is possible.”

The activists in Hungary and Romania will, in any case, keep going. With the Facebook analytics-tool Gulyás shows the enormous reach one of his pages has. “We use them to support and to help mobilize. We’re not paid for it, we don’t ask anything in return”, he hastens to add.

Rapeanu, for her part, is optimistic about the future: “There is still hope that we can raise our children in a better country, that we have accomplished more in the past few years than in the first twenty years after the fall of communism and that we as individuals are changing. I believe that we, in spite of everything, will win.”

The night it was announced that the internet tax was off, Gulyás organized a protest, this time in the form of a party to celebrate victory. “By closing like that, we were sending a clear message to everyone who had taken part in the resistance: know that change is possible.” 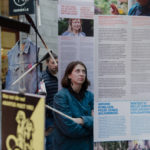