Spectacular stories like a plane hijack, and small drama like giving birth during the revolution are being told in the videos made by Hungarian youngsters. The videos are the result of the Iron Curtain Interview Contest, in which the Hungarian youngsters were encouraged to interview their own (grand)parents about the communist past and ask them that one question they never dared to ask.

During the screening of the videos on the 11th of December in Budapest, the participants of the contest shared their experiences and discussed their videos with the public. It wasn't always easy to make the relatives tell their stories in front of a (smartphone) camera, the participants recall. "My grandparents still seem scared to talk about communist life. If they do, they tend to whisper, because 'the neighbours might hear'", says a young man in the public who was amazed by the openness of one of the interviewees in the videos. One participant admits that he indeed needed his mother - who is a lawyer - to convince his grandmother to participate.

In the videos people tell about their personal lifes during the communist period in Hungary. A grandmother tells about her little rebellion against the anti-religious attitude at her school; a father tells about his love for the scarse western products that he could acquist, like a pair of jeans. "These personal stories make me imagine how I would have behaved in their shoes", says a student from the public in reaction to the videos. Some youngsters figure that the tendency to think that 'when it's from the west, it is better' still exists, even in their own generation.

At the meeting, the winner of the contest was also announced. The jury consisted of the famous documentary making couple Eszter Cseke and András S. Takács, known from their series On the Spot. Also the award winning documentary maker Eszter Hajdu and the historian specialized in oral history Eszter Tóth took part in the jury. They had unanimously decided on the video of Balázs Ficzere, a finance student. He interviewed his grandmother who tells how, as a little girl, she was afraid that people would find out that her family did 'illegal pig slaughtering' in order to have more food. Cseke and Takács called his film in the jury rapport 'not only a beautiful oral history, it also draws a picture about the way of life in an era behind closed doors.'

In the discussions about the videos at the meeting becomes clear that the students usually don't tend to ask their relatives much about the past. On the other hand, the relatives themselves do not openly talk about it that much - except for a few anecdotes that are being repeated at every family diner. One contester says she's very thankfull to the project, since it motivated her to go and ask for it proactively. She ended up finding things out she didn't know about her family.

Winner of the contest: "Stories from a village' by Balázs Ficzere.

Watch some of the other video's here.

At the start of the contest in October the ICP organized the Iron Curtain Interview Workshop in Budapest, in which around sixty students took part. The workshop, that took place on the 15th of October, provided the youngsters with knowledge about oral history and tips and tricks to conduct a good interview. During this meeting, history professor András Joó from the Cold War History Research Center gave a small lecture, and Marton Baranyi from the museum Terror Haza talked about the importance of oral history. Frank Odzuck, CEO of the Hungarian liquor company Zwack Unicum shared his own oral history about how he fled the country. After a speed course interviewing, students publicly interviewed professor Gyula Jobbagy about his personal experience as a student opposition leader during the communist time. 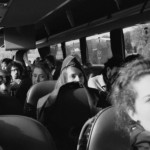 Exactly twenty-five years after the fall of the Berlin Wall, a touring car full of Dutch traveled to former border crossing Helmstedt-Marienborn to commemorate the…