The Forum on European Culture is a Biennial on the impact and the value of art and culture for Europe. This edition's theme is ‘act for democracy’ and we have been invited to display our What If!? Pop-up Museum in De Balie, Amsterdam. This travelling exhibition tells the personal stories of 68’ers from Eastern and Western Europe and connects the past with the present by introducing innovative ideas of young thinkers.

On the occasion of the opening of the pop-up museum there will be a special programme on the ambiguous legacy of 1968. Alain Geismar is one of the main speakers. Geismar (1939) taught physics at the Sorbonne in Paris, when he became one of the three leaders of the student revolt in 1968. The revolt resulted in violence and a general strike in France, in which at its peak some ten million workers participated. In 1970, Geismar was jailed for a year and a half for ‘inciting violence against the police'.

Geismar will share his witness accounts of the revolution and looks into the effects. Furthermore young thinkers and activists will share their inspiring ideas for the future. Guests are Swiss activist Flavia Kleiner, the Polish-Belgian author Alicja Gescinka and the Belgian philosopher and writer of the book ‘This is tomorrow’ Thomas Decreus. What are their ideas to smash the present-day status-quo? Also, journalist Roel Jansen will elaborate on his new book ‘1968, So You Want a Revolution’. Jansen was a young student in 1968. When he heard of ‘Paris’ he drove there in his grandfather’s car to be a witness. The programme will be moderated by Eelco Bosch van Rosenthal (former correspondent in the US and anchor of Nieuwsuur).

After the programme you can visit the WHAT IF!? Pop-up Museum about the spirit of 1968 on the first floor of De Balie. Read, watch and listen to stories of old rebels and new revolutionaries. Dagmar von Doetinchem for example decided to go live in Kommune nr 1 in Berlin, but soon got disillusioned. Jonah Lamers wants to get rid of the rigid gender division of today and Jos Ripken makes full use of his freedom of speech by leaving hate speech on social media. Is he a rebel against the system too? You can leave your own thoughts in the WHAT IF!? Photo Booth and you can try to keep the balance in our democracy by playing the WHAT IF!? Balancing Game.

This event is made in close collaboration with Forum on European Culture, De Balie and Dutch Culture. Many thanks to Anne-Marijn and Merlijn Geurts. 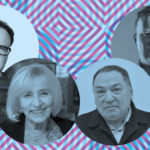